Posted on September 19, 2013 by christyfarrisbooks

Anyone who knows me knows that I am petrified of snakes. Doesn’t matter what kind, whether they are alive or dead or even if it’s a picture on the computer or one on television. I freak out! My husband says that I can run on my tippy toes on water if I see a snake. He gets many laughs from this.

Today, I was following him to the local gas station so he could put air in my tires. He pulls over at the ATV shop down the road from our house. Wondering what’s the matter, I pull in beside him. Now since he has a penchant for tearing things up, when he got out and began to play with his windshield wipers, I automatically thought he’d broken them. So I get out of my vehicle and walk over to see for myself. When I approach, I notice he’s grinning. This confuses me, since I think his truck is broken.

“I’ve got a hitchhiker.” He states and raises his wiper up for me to see. Wrapped around the wiper, clinging for dear life is a teeny tiny green snake. Well, I scream and take off through the parking lot yelling at him to get the thing off there and step on it. He removes it from the wiper and walks to my vehicle to show Bob. Bob squealed but then stopped to study the tiny thing. I am safely squatting down on the other side of the vehicle watching my husband. I really didn’t trust him. When Bob has looked his fill, Randy starts around the back of my vehicle while I high-tail it around the front. I stop when I realise that the owner of the shop had stepped into the parking lot wondering if we were ok. Didn’t I feel silly. Randy continued toward Johnny, holding up the offending reptile.
“What’s wrong?” Johnny asks.

Johnny then walks up to Randy to inspect it. He’s enamored with it. I don’t know why. He even went as far as asking Randy what he planned to do with it, to which I yelled, “Stomp it!”

But no, not these fellers. Johnny decides he wants it. So my hubby passes it into his hands as he’s telling him what had transpired. Well, I guess he wasn’t thinking too clearly because he just happened to tell Johnny that the little feller had probably fell off the tree in our yard that he parked under. Then I started thinking, not only does Randy park under that tree, I do too.

With that thought still in my mind, we start back down the road. It was only moments when I began to feel things crawling up my legs or up my neck. I could just imagine those little green heads poking their way out of my air conditioner vents or up through the defroster. I thought I’d roll my window down a bit and try to calm myself down since I was jerking the car all over the road as each of these imaginary critters slithered over me. Once the window was cracked, all I could think of was what if one was on the top of my vehicle and decided to slide through the open window. Then I became convinced that if I rolled the window up, I would catch one of those half in and half out of my window and I could just see if wriggling there by my head. Shivers raked my body and I broke out in a cold sweat.

By that time, we had reached the gas station. I pulled up to the air hose and calmly got out of my vehicle. When Randy came over to me, I looked at him and said,

“I don’t care if you pretend or what, while I am gone into that store to get us a drink, I want you to check my vehicle and make sure there aren’t any of those things on or in it. I don’t care as long as you reassure me that one won’t pop out on me as I drive down the road.”

He laughed heartily and promised he would. And when I came back out, he did. I watched as he diligently checked my car. He even went so far as to tell me that it probably hadn’t come from our house at all. Even though he thinks I’m nuts, he loves me anyway. 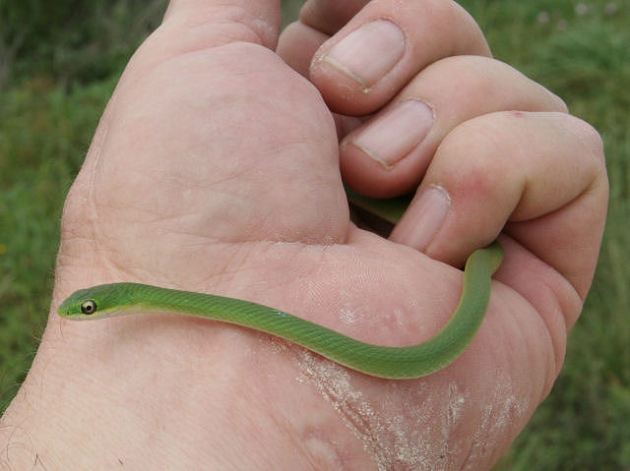 This is not the snake that we saw but it is roughly the same size. No serpents were harmed in the making of this story, unfortunately.

Writer of young adult fantasy, romance and humor. Mother of seven. High ruler of the Kingdom of Crazy. :D
View all posts by christyfarrisbooks →
This entry was posted in Uncategorized and tagged husband, laughter, scared, serpent, snake. Bookmark the permalink.